Dear Gaspare this project is very exciting.
I have to confess I never thought it would happen.
Now I’m thrilled.

PEPPERLEGACY – The Music of Art Pepper 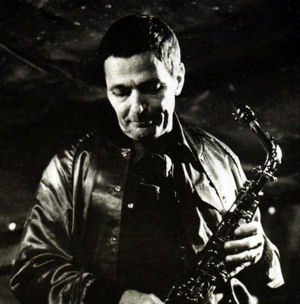 – is a true and honest tribute to a great master of the saxophone, which brings back up his many interesting original compositions with the musicians who mainly shared with him the last sensational years of his career; these are real founders, still at the height of their amazing careers: George Cables, David Williams, Carl Burnett (absent in Europe for about twenty years), but also Milcho Leviev, Bob Mangusson and Tony Dumas. The delicate and surely thankless task to replace the giant Pepper is given to the promoter of this project, the Italian Gaspare Pasini – whom already sided many musicians from overseas, among which Williams himself.
This project was “blessed” by the great Phil Woods, who did not simply supported its realization, but also contributed with one of his unreleased compositions wrote in memory of his lost colleague and friend. Listening again live to the amazing compositions of the musician from California with his rhythm section, after more than thirty years from his death – is undoubtedly an interesting operation for any real jazz lover: Straight Life, Ophelia, Diane, Mambo Koyama, Blues for Blanche, My friend John, Valse Triste, The trip, Surf Ride, Make a list, True blues…are some of the musical gems which – within the same harmonic structure – contain and explain Pepper’s poetry, and which are proposed again by PEPPERLEGACY with due respect to the giant Art.

Thirty years after his death, Art Pepper still resounds in the mind and especially in the heart of those who love jazz, the music which more than any other is able to arouse the deepest and most authentic emotions. Many things have happened over the last three decades and some of these have totally changed our daily life, in both positive and negative ways. Jazz, as usual, captured all the contradictions produced by the fierce globalization, which corrupted also the art world in general. The heart, our emotional driving force that reflects and feeds love, has to give off more and more of its own life space to the intellect – increasingly urged by the whirlwind of changes.
Who listened to the music of Pepper (1925-1982), the amazing alto saxophonist from California who already in the ‘50s – in the middle of Parker’s time – shined in the Down Beat charts and who during his unlucky life had to explore the depths of hell, knows that only a few musicians in the history of Afro-American music were able to combine such a technic-instrumental virtuosity with their own personal past.
We prefer to leave aside the story of the fantastic events which filled his life, irreparably interfering in his yet amazing career; there are hundreds of webpages online on the subject, in particular his autobiography “Straight Life” written together with his beloved wife Laurie. Instead, we would rather underline the emotional side of his language; those who had the privilege to see him play in the final stage of his career, from 1975 to 1982 (after years of nearly total oblivion), have consciously witnessed a humanly and musically amazing event. The vibes that Pepper could express with his alto saxophone sprang out of the highest of heavens and the deepest of hells, a magma of sound soaked in an almost hypnotic energy; the “Californian” Pepper, instrumentally exemplary, master of an absolutely recognizable phrasing, had elaborated through the years the thickness of his sound –which had grown darker, more robust, rough at times – and also condensed the notes (sometimes very few, crystal clear, while heavy as boulders). His music, in his last years, was a kind of total and vulnerable soul sacrifice, as if he were saying to those who listened to him “here I am: this is me, for better or worse. I give you my life and my heart.”

Maybe this is precisely what the music of most contemporary jazz musicians lacks: the ability to arouse deep emotions and to tingle inside, and not only to evoke rational admiration for some extraordinary technic-harmonic mastery.
Art Pepper taught us – like all great masters of Afro-American music – how a single note could be worth more than a hundred notes, and how to be honest and to open yourself wide could be risky (sometimes his performances have been definitely below his incredible communicative standards) but necessary, to go straight to the heart of the audience.